The above information is provided in SSI Securities Market Overview Report for the first 8 months of the year of SSI Securities Company. In this report, SSI stated that real estate businesses are the group that has offered the most bonds since the beginning of the year.

Issuing lots have an interest rate of 12% or more. Source: SSI

Of the VND 36,876 billion of real estate bonds issued, the commercial bank group alone collected VND 7,410 billion (20.1%), along with VND 3,250 billion (8.8%) of bonds bought by securities companies (including many securities companies being subsidiaries of banks). Meanwhile, VND 22,664 billion (61.5%) of the bonds were bought but it was only information that domestic investors spent money.

Commercial banks such as VPBank, MSB, SeABank, TPBank and OCB have also bought hundreds of billion dong of bonds from real estate businesses since the beginning of the year.

If excluding the banking group, the average interest rate of the remaining groups is 9.72%/year, of which the highest is the bond interest rate of real estate enterprises (10.01%/year), infrastructure development group (9.79%/year); financial institution group (8.64%/year). 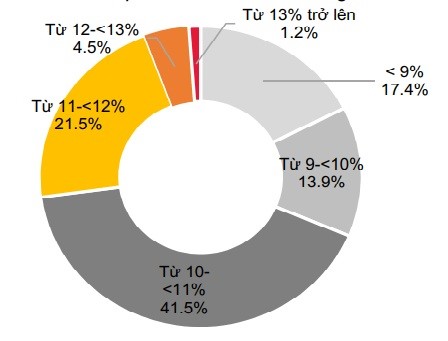 According to SSI, real estate is a business field requiring large capital and potentially risky. Commercial banks themselves must apply the risk ratio of 50% for loans secured by houses and land use rights; 200% for investment loans, real estate business (according to Circular 36) and this coefficient is even higher in the draft circular instead. The risk is higher so real estate bond interest rate is among the highest.

Based on the figures on the balance sheet at June 30, 2019 of 18 listed commercial banks, the total bonds held by banks is nearly 230.5 trillion dong, increasing by 65 trillion dong from the end of 2018. In which, some banks have increased strongly, including Sacombank, VietinBank, SHB, MBBank. The bank holding the most corporate bonds is still Techcombank with a balance of VND 60,663 billion as of June 30, 2019.

According to SSI, compared to lending, the purchase of corporate bonds will help commercial banks be more flexible because they can sell part of these bonds to organizations, investment funds and individual customers when needed adjustment of asset items on the balance sheet.

However, the securities company also expressed concern that some banks may use corporate bond instruments, through complex financial transactions to restructure issuers' debt or other target.

In order to limit the potential risks, the State Bank recently sent a letter to commercial banks asking to strengthen control of corporate bond investment activities and said it will strictly handle cases of violation.

According to Dieu Trang