A real estate market report for the second quarter of 2019 of Batdongsan.com.vn showed that the average price of townhouses was usually more expensive than 1.5-2.5 times the price of private houses in the same district. This difference was highest in Hoan Kiem district. 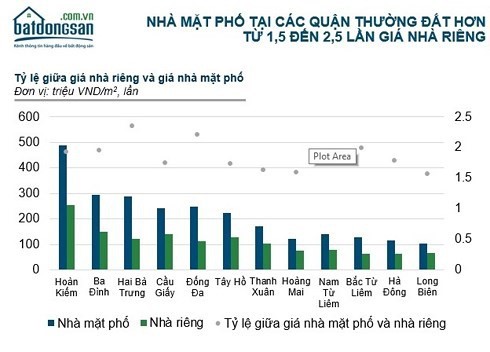 Price list of townhouses and separate houses in districts in Hanoi. (Source: Batdongsan.com.vn)

The research of Batdongsan.com.vn also showed that, except for Hoan Kiem district, townhouses and private houses in districts far from the center of Hanoi, the selling price increased sharply than the central districts.

Along with that, in the second quarter, townhouses selling and renting had a slight increase in the main districts while private home prices fluctuated slightly in many districts.

For the housing segment in central districts of Hanoi such as Hoan Kiem, Cau Giay, Dong Da, Ba Dinh, Tay Ho increased from 2015 to 2018 is about 1-7%. In particular, Hoan Kiem district had the highest increase, from about VND 110 million to VND 120 million/m2.

However, private houses in non-CBD districts such as Nam Tu Liem, Bac Tu Liem, Hoang Mai, Long Bien, and Ha Dong had a stronger increase than the central districts, up 13-16%. Specifically, from 2015 to 2018, private houses in Bac Tu Liem district increased by 16%, from below VND 60 million/m2, up nearly VND 70 million/m2; In Long Bien district, prices increased by 13%, from around VND 57 million/m2 to nearly VND 65 million/m2.

Thus, it can be seen that both the townhouse and private housing segments in Hoan Kiem district are holding the strongest increase when this is the largest cultural and commercial center district of the Capital.