Grade A office in Hoan Kiem is always the focus of companies and large corporations. However, for the past 2 years, Hoan Kiem has no longer held the upper hand in the trend of selecting Grade A offices in Hanoi. With the same criteria: prime location, standard A, tenants are moving to Ba Dinh - another central district of Hanoi.

When Mr. Do Quoc Vinh's company decided to open a branch in the North, as a branch director, Vinh wanted to find an office in Hoan Kiem - the most central district in Hanoi. However, the biggest challenge Mr. Vinh encountered was not finding a suitable space for an office in this district. Most of Grade A office buildings in Hoan Kiem have not too large floor area, a small supply and are always in a state of being filled so Mr. Vinh does not have many options. After a period of searching, he decided to change the direction to find another area.

Meanwhile, one of the proposals that Ms. Ngo Hai Quynh and her colleagues proposed in the employee satisfaction survey was to relocate the company's headquarters - a Grade A office in the Hoan Kiem district to other districts has more convenient transportation. Ms. Quynh said that a large number of employees in the company were living in the western area of Hanoi. With a distance of 8-10km, moving from residence to the office took an average of 45 minutes to 1 hour at rush hours, which was always congested with traffic. According to Ms. Quynh, the partners and customers of the company also focused on the areas of Ba Dinh, Dong Da, Cau Giay, so the movement to meet customers was also very inadequate.

Mr. Nguyen Cong Hau, a brokerage specializing in the office leasing segment, shared that, Hoan Kiem was the choice of many large companies and corporations. Setting up an office here was not only a simple inheritance of utilities, services, a well-established social and transport infrastructure system but also a way for many units to assert their positions. Therefore, the price of Grade A office space in Hoan Kiem was always at the highest level and tended to increase over the years. By the first quarter of 2019, Grade A office rent in Hoan Kiem had reached 40 USD/m2/month.

Although the rent and occupancy rate was high, according to Hau, in the last 2 years, Hoan Kiem was no longer the only option of customers who wanted to rent Grade A offices in the central location due to the overload of infrastructure. Along with the criteria of Grade A office, the central location, quite a lot of customers proactively proposed right from the beginning to find premises in other central districts of Hanoi such as Ba Dinh and Dong Da. In previous years, Hoan Kiem was always the first name mentioned.

Explaining this phenomenon, Mr. Bui Trung Kien, Savills's commercial leasing director, said Hoan Kiem was overwhelming in the number of Grade A offices in Hanoi but the leasing offices here were facing with old condition. The latest building was also completed 6 years ago. In addition, this area is limited in height, cultural heritage law, scarce land fund, so the supply was very limited. Hoan Kiem is always in shortage of future supply, lack of floor space and lack of large-scale offices. Therefore, many large corporations and companies such as KPMG, PwC, SMBC, Prudential, and Standard Chartered have moved their offices to nearby districts. 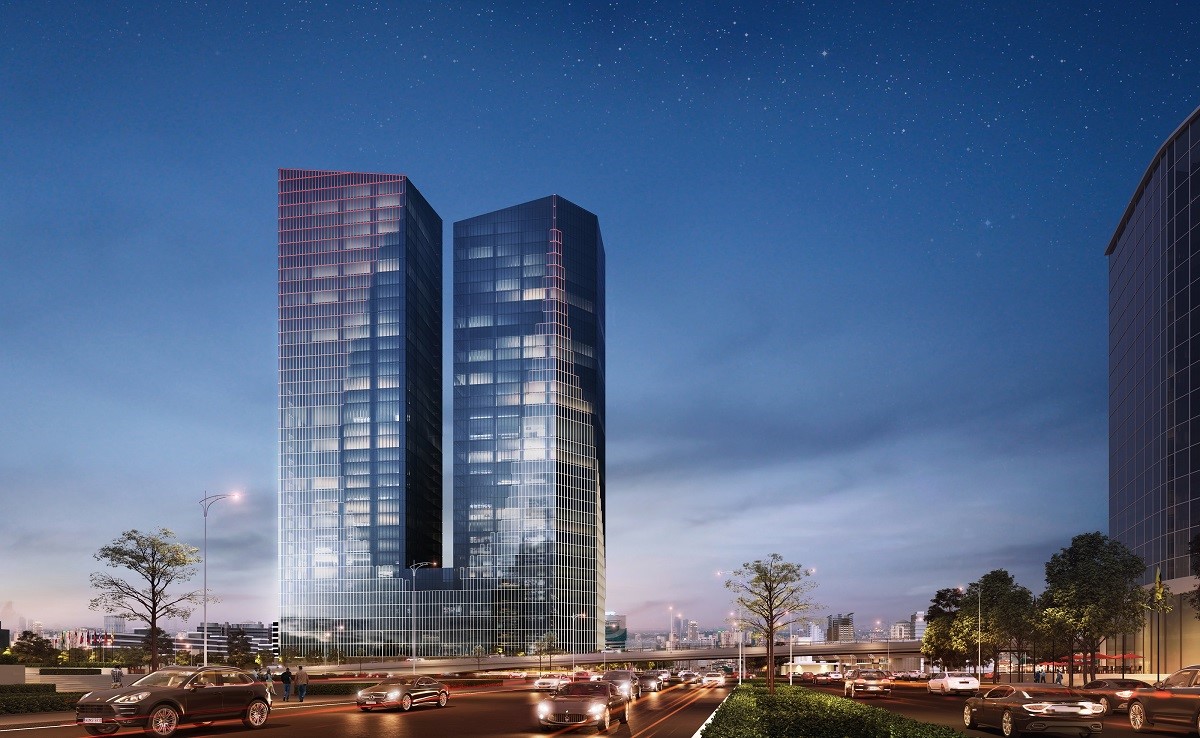 In recent years, Ba Dinh has emerged as an ideal new market due to transshipment location between old and new centers. Illustration

Ba Dinh - the next choice after Hoan Kiem

Interestingly, Do Quoc Vinh and Ngo Hai Quynh's companies both chose Ba Dinh as the next destination after Hoan Kiem. The survey of Batdongsan.com.vn also showed that Ba Dinh is ranked second after Hoan Kiem in terms of rent at a price of about 35 USD/m2/month.

Nguyen Thu Hong, an office leasing broker in Hoan Kiem area, Ba Dinh said that in the past 2 years, the number of customers looking for office rent in Ba Dinh has doubled compared to the previous time. These guests will only choose to rent in the west if they do not find a satisfactory ground in Hoan Kiem and Ba Dinh.

However, like Hoan Kiem, the supply of offices in Ba Dinh is extremely limited. Specifically, Hoan Kiem has no new supply due to the historical inner city, Ba Dinh has only one additional Grade A office project, Capital Place (29 Lieu Giai, Ba Dinh). Capital Place consists of 2 37-storey towers, providing about 121,000 m2 of total floor area. This is also the first office project in Hanoi to be LEED certified - an international standard certification for green buildings.

In fact, like Hoan Kiem, the Grade A office towers in Ba Dinh are having very high occupancy rates. For example, the occupancy rate at Lotte Center Hanoi reached 100%, Daeha Business Center reached 98%, DOJI Tower reached over 90%. Even at Capital Place, although it is expected to open in the third quarter of 2020, the current rental progress is very good, more than 60% of international businesses and large corporations in the country negotiate with investors to rent office space and retail.

Explaining the attraction of Ba Dinh, Mr. Bui Trung Kien, Director of Commercial Leasing Department of Savills Hanoi, said that in recent years, Ba Dinh has emerged as an ideal new point of the office market due to its location between the old center and the new center. Although there are not too many projects, Ba Dinh converges many large and modern towers. The extended roads and access to the main roads have been invested and developed. The area also diversifies the supply of high-quality hotels and serviced apartments, trade centers - important support services of the office market.

According to Thuy An